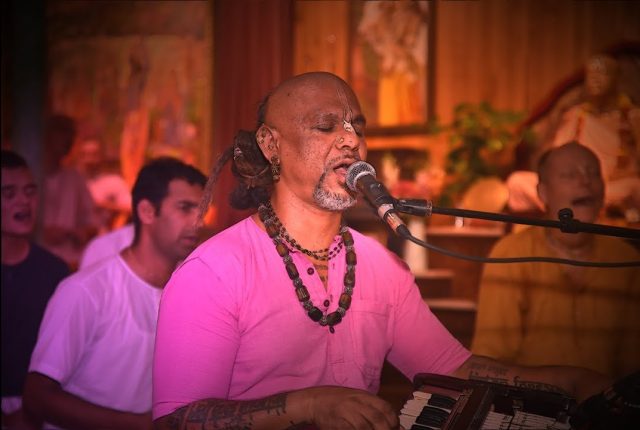 On Friday August 5 from 7PM – 9PM we are hosting a Kirtan guided by Madhava Naidoo.

Madhava Naidoo is honoured and recognised worldwide as the master of Kirtan. He travels world-wide to do Kirtan and chanting holy mantras. For 3 years now Madhava visits Amsterdam for a Kirtan weekend. Each time with lots of joy & inspiration. Every event has been a great succes to the local Dutch yogis, experiencing deep meditative soul work. 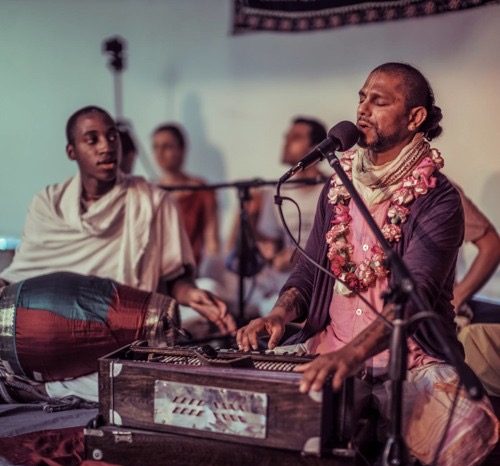 Madhava was born on October 1, 1973 on the island of Mauritius. He was 5 years old when his parents became fully committed Krishna devotees while staying at home and working at their jobs. Straightaway, they gave him his first mridanga (Indian clay drum), and, motivated by them, Madhava chanted 4 rounds of japa every day until he was 13 years old. As a teenager he rebelled. After some bumps and wild detours his fascination with music led him, at the age of 18, to ask his parents to send him to Vrindavan, the holy city of Krishna. He hoped to join the kirtan party there.

In January 1992, age 18, on the very first day Madhava arrived in Vrindavan, he met Aindra Das, the leader of the 24-hour Kirtan, who asked him to join the Kirtan party. Every day for the next 5 years Madhava would play Mridanga for Aindra Das. At the end of 1996 he went back to Mauritius. Barely two years later, Madhava returned to Vrindavan for a brief stay and, before leaving, received the instruction from Aindra das to “always chant Hare Krishna, even if you have to do it to the four walls—and never stop practicing your mridanga.”

In 1999 Madhava married Radhika in the UK and a year later he joined her in Switzerland to settle there. For the first 4 years he studied German and carpentry at school while working as an apprentice carpenter. After qualifying as such, he worked full time for 6 years. Meanwhile he was doing kirtan with Sivaram Swami, an Iskcon leader, in Hungary or the U.K over weekends. In 2005 he and some friends formed a group, “Gaura Prema,” and did their first public kirtan in a church in Zürich. Mainly people interested in yoga attended. In response to public awareness in kirtan, the group began chanting spiritual mantras in the many yoga schools in Germany and Switzerland.

In 2009, Madhava’s boss sold the company, leaving him jobless. A year later, a Vaisnava patron intent on promoting kirtan offered to partly fund his cost of living if he would make kirtan his life’s task. That year, for the first time, he traveled around Australia for a month, doing kirtan in Iskcon temples and major yoga schools on the east coast. Since then he tries to serve the Holy Name whenever and wherever he is called.

We ask a donation for the project of Madhava so he is able to pay for the travels of his Kirtan team to Amsterdam, for accommodation and for food.
Indicative to your budget: €15 – €25 or €35.

Send me an email or whatsapp before August 3th.
There are a maximum of 30 spots available.

We’re looking forward to see you!